Recent Arrival!
Len Stoler Lexus is conveniently located in Owings Mills, and just minutes from the Baltimore Beltway and Rt. 795. Stop by and visits us and shop our huge selection of Certified and Pre-Owned Lexus Inventory. We promise to provide you a simple and hassle-free buying experience with the best price possible!

All pre-owned vehicle pricing excludes taxes, tags, title, $500.00 Dealer Processing Fee (not required by law). While every attempt has been made to ensure the accuracy of the data displayed, the Dealership is not responsible for any errors or omissions including prices, options, photos, and vehicle descriptions. Some vehicles may be Previous Demos and all vehicles subject to prior sale. To receive this internet price, you must print and present this page to the sales team upon arrival. We make every attempt to make every deal possible for every customer, if you have a question or concern, please ask for a Sales manager.

Model Overview
The X5 comes in one of four different configurations, each with their own drivetrain. Powering base models is a 3.0L 6-cylinder engine making 335 hp. Power is sent to the rear wheels via an 8-speed automatic. The next trim level up uses the same engine, but instead sends power to all-four wheels. For those wanting a little more power, the top-of-the-line M50i is powered by a V8 twin-turbocharged 4.4L engine making 523 horsepower mated to an 8-speed auto. The hybrid xDrive45e is powered by a 3L turbocharged 6-cylinder engine combined with an electric motor that produces a combine horsepower of 389 horsepower. The hybrid has an all-electric range of 30 miles.
The base X5 sDrive40i may be at the bottom of the lineup, but it's far from sparsely equipped. It comes standard with 19-inch wheels, power folding and heated mirrors, a wood trimmed interior, Apple CarPlay, a 10-speaker sound system, SiriusXM satellite radio, two 12.3-inch displays, multiple USB ports, cruise control, keyless entry, automatic climate control, a panoramic moonroof with a 2-piece glass panel, rain sensing wipers, a power liftgate, heated front seats and ambient lighting.

The X5 M50i has a more aggressive exterior, with body colored side skirts and wheel arches along with a more aggressive front fascia. It looks far more aggressive and sportier on the outside to go along with its more serious performance goods. In addition to the bigger engine, it also gets sportier suspension, 20-inch wheels and a rear limited slip differential tuned by BMW's M division. Handling is improved over other versions of the X5, and the M50i should be able to hit 60 mph in under 5 seconds.

The X5 M is powered by a 4.4L twin turbo V8 that's capable of 567 horsepower or 617 in the competition model. The X5 M rides on 21-inch alloy wheels with performance tires, has painted calipers and bigger brakes, sport bucket heated front seats, and a heated leather sport steering wheel. 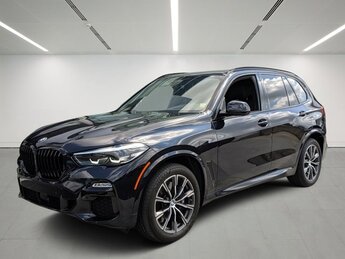